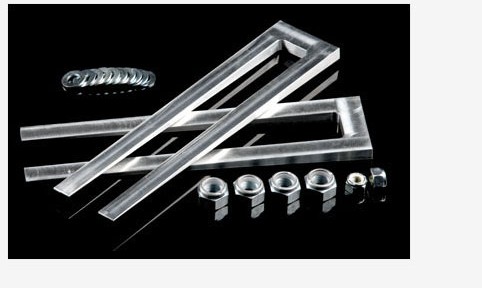 Lighten the steering of your MGB and reduce mid-corner weighting with our castor correction wedges – the original and still the best. We believe they offer the greatest single improvement on the market for such a small price. “The car went some 900 kms over the last weekend on an MG tour over all kinds of roads. To be able to turn into corners with just two fingers on the wheel instead of a tight grip of both hands and have almost no understeer was a sheer delight. What more can I say but you have done a good job developing this technology and many thanks for it” -John

MGBs were produced with a castor angle of 6.5 degrees to allow for tyre slip of 10 to 11 degrees. Modern tyres have a slip angle of 2 to 3 degrees, causing the MGB steering to load up and become increasingly heavy the harder you corner. Castor angle is employed primarily to self-centre the steering at speed. As modern tyres are far more directional, less self-centring force is required and therefore less castor. Frontline’s innovative castor wedges fit between the chassis and the front crossmember to rotate it forwards by around 3 degrees, thereby reducing the castor angle. The result gives noticeably lighter steering that doesn’t load up when cornering, increases positive feedback through the steering and improves directional control.

Difficulty rating:
This is a very easy DIY fit requiring only that you loosen 4 bolts, fit the wedges and add some bushing to the rack. It should take you 1.5 hours to install and you may want to have your tracking re-checked afterwards.
Download fitting instructions
Always use appropriate equipment for the job at hand. If in doubt, seek professional advice.

What is castor? Castor is that part of a car’s suspension geometry the primary function of which is to ensure the car travels in a straight line at speed. It is the term given to the slight backward tilt of the upper end of the kingpin of a car to produce directional stability at the front wheels and a degree of self-centering. Why does it need changing? When the MGB was designed, the tyres available had a much greater slip angle than modern tyres. Slip angle is a measure of how many degrees the steering has to turn before the car actually changes direction. Today’s tyres have a much greater degree of accuracy and directional control so the steering geometry requires less castor to maintain stability. What difference will the castor kit make to my car? Most MGBs have heavy steering. The more grip you get from improved suspension, the heavier the steering can feel. This is all the result of too much trailing castor. Fitting the castor correction kit reduces the trailing castor to the degree required by modern tyres. The result is lighter, more responsive steering. Customer comments: “I thought I would send you a short email to say how impressed I am with the castor wedges you installed on my RV8. I never would have thought that such a simple and cost effective change would make such a difference to the car. The steering is now lighter at slow speed, and more communicative and responsive overall. I no longer find myself fighting with the steering wheel on poor road surfaces, and I have to say that the addition of the castor wedges has made RV8 ownership a more enjoyable experience. I would have no reservations in recommending this modification to other RV8 owners.” Jeff “A brief note to let you know that I have installed the wedges and found the results to be excellent, very much exactly as your customer Jeff described in his letter that you onforwarded to me.” Warwick “The car went some 900 kms over the last weekend on an MG tour over all kinds of roads. The result with 34psi in the front and 30 psi rear was outstanding. To be able to turn into corners with just two fingers on the wheel instead of a tight grip of both hands and have almost no understeer was a sheer delight. The car does not fight you as it did before. Directional stability is still retained with 100 mph on passing lanes no problem! What more can I say but you have done a good job developing this technology and many thanks for it,” John